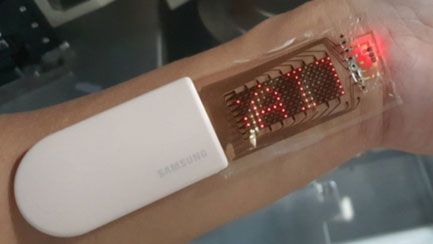 Samsung works on OLED screens that can be stretched for worn

One of the most important findings in this study is that this is the first in the industry to prove the potential commercialization of devices that can be stretched. The new technology described in this study can be integrated with existing semiconductor processes. Researchers combine organic LED displays that can be stretched and fotoplethysmography sensors (PPG) into one device to measure and display the user’s heartbeat in real-time.

During the study, the researchers found the display continued to work stably after being stretched 1000 times. The prototype device to measure the heartbeat is able to measure the signal from the wrist that moves accurately. The sensor takes a heartbeat signal which is 2.4 times stronger than the signal taken by a fixed silicone sensor.

To overcome the flawed display challenges that violate or degrading performance, all materials and elements used, including substrates, electrodes, thin film transistors, emission material layers, and sensors, must have electrical properties while maintaining electrical properties. The team replaces plastic material in the display that can be stretched with elastomers. The testing system is the first to apply the display and sensor using the photolithography process, allowing micro-pattern processing and large areas.